Amphenol Co. (NYSE:APH – Get Rating) has earned an average recommendation of “Hold” from the ten analysts that are currently covering the firm, Marketbeat.com reports. Five analysts have rated the stock with a hold rating and three have issued a buy rating on the company. The average twelve-month price objective among analysts that have issued ratings on the stock in the last year is $84.56.

Amphenol (NYSE:APH – Get Rating) last posted its earnings results on Wednesday, October 26th. The electronics maker reported $0.80 earnings per share (EPS) for the quarter, beating analysts’ consensus estimates of $0.75 by $0.05. Amphenol had a net margin of 14.98% and a return on equity of 28.02%. The firm had revenue of $3.30 billion during the quarter, compared to analyst estimates of $3.11 billion. During the same period in the previous year, the business posted $0.65 EPS. Amphenol’s revenue was up 16.9% on a year-over-year basis. On average, equities analysts forecast that Amphenol will post 2.97 earnings per share for the current year.

The company also recently announced a quarterly dividend, which will be paid on Wednesday, January 11th. Investors of record on Tuesday, December 20th will be paid a $0.21 dividend. The ex-dividend date of this dividend is Monday, December 19th. This is a boost from Amphenol’s previous quarterly dividend of $0.20. This represents a $0.84 annualized dividend and a dividend yield of 1.08%. Amphenol’s dividend payout ratio (DPR) is currently 26.85%.

Hedge Funds Weigh In On Amphenol

Amphenol Corporation, together with its subsidiaries, primarily designs, manufactures, and markets electrical, electronic, and fiber optic connectors in the United States, China, and internationally. It operates through three segments: Harsh Environment Solutions, Communications Solutions, and Interconnect and Sensor Systems. 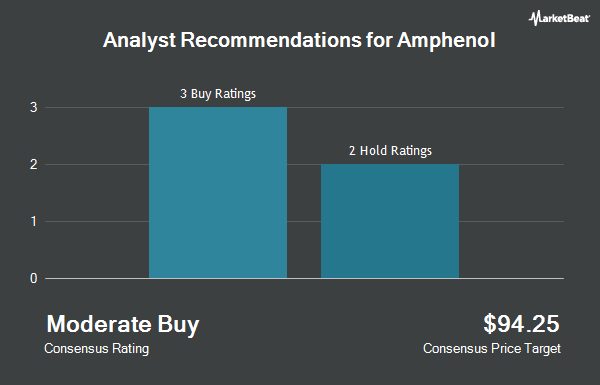 This instant news alert was generated by narrative science technology and financial data from MarketBeat in order to provide readers with the fastest and most accurate reporting. This story was reviewed by MarketBeat’s editorial team prior to publication. Please send any questions or comments about this story to [email protected]arketbeat.com.

Before you consider Amphenol, you’ll want to hear this.

MarketBeat keeps track of Wall Street’s top-rated and best performing research analysts and the stocks they recommend to their clients on a daily basis. MarketBeat has identified the five stocks that top analysts are quietly whispering to their clients to buy now before the broader market catches on… and Amphenol wasn’t on the list.

While Amphenol currently has a “Moderate Buy” rating among analysts, top-rated analysts believe these five stocks are better buys.